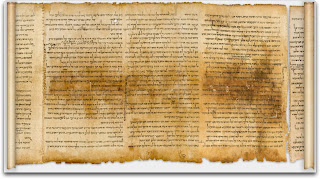 Six months ago the Israel Museum and Google teamed up to digitize and publish online the Dead Sea Scrolls. They just released the firstfruits of their labors at a website called, appropriately enough The Digital Dead Sea Scrolls.

The site contains five Dead Sea Scrolls digitized thus far, including the Great Isaiah Scroll, the Community Rule Scroll, the Commentary on Habakkuk Scroll, the Temple Scroll, and the War Scroll. The site is still a work in progress, and thus far only the Isaiah Scroll is searchable by verse in English, but the site is still worth checking out! As it matures and develops, more material will be added...and additional resources for English-only readers will hopefully be provided.

Take the site for a "test ride" in the following way.
Apart from not having the vowel points, a first-year Hebrew student could read the last line (from right to left) as saying "Comfort. Comfort my people says your God…."

So why is this significant? It indicates that when this scroll was copied (sometime around 130-100 B.C.) there was no indication that Isaiah 1--39 and 40--66 were thought to be two separate books by multiple authors (a common view among critical scholars today). Had the scribe thought this to be so, it seems most natural that he would have ended the Isaiah 1--39 portion and then begun the new book at the top of the next column. Nothing in the manuscript supports the idea that Isaiah was anything more than a single book at the time this copy was made! (And since this was a copy made from an earlier work, we can logically push the date back even further in time.) In short, this manuscript creates major problems for those who hold to the theory of multiple authors for the Book of Isaiah.

One last suggestion. Click the "zoom out" button for the scroll to return to the original size. And then hover your mouse over the text. Doing so will highlight the individual verses in the scroll. By clicking on the highlighted section you can read a translation of that particular verse. It gives those who can't read Hebrew a sense of what it is like to read from the text.

This site is definitely worth bookmarking...and returning to at frequent intervals!

Iranian President Mahmoud Ahmadinejad spoke this past week before the UN General Assembly. And once again he presented his distorted views of the past, the present, and the future. The press focused on his denial of the Holocaust, his conspiracy theories on the September 11 attacks, and his ugly tirades against Israel and the United States...and the mass exodus of delegates in protest.

But most in the press missed Ahmadinejad's comments about the future...and what he believes the future holds. Over the years he has remained remarkably consistent in his focus on what the future holds...and on his call for all nations to "come to faith" before it's too late.

Here are some of his closing comments from last week's speech as he called on nations to rally together to advance his view of the future...

A future that will be built when humanity initiates to trend [sic] the path of the divine prophets and the righteous under the leadership of Imam al-Mahdi, the Ultimate Savior of mankind and the inheritor to all divine messengers and leaders and to the pure generation of our great Prophet.

The creation of a supreme and ideal society with the arrival of a perfect human being who is a true and sincere lover of all human beings, is the guaranteed promise of Allah.

He will come alongside with Jesus Christ to lead the freedom and justice lovers to eradicate tyranny and discrimination, and promote knowledge, peace, justice freedom and love across the world. He will present to every single individual all the beauties of the world and all good things which bring happiness for humankind.

And what can Iran do to help hasten the coming of this Islamic messiah? "Our great nation stands ready to join hands with other nations to march on this beautiful path in harmony and in line with the shared aspirations of mankind."

Two thoughts came to mind as I read his speech. First, to understand Ahmadinejad and Iran one must understand what he truly believes will take place in the future. These statements are not simply platitudes for the Islamic masses. Ahmadinejad believes what he is saying, and the actions he and Iran have taken over the years are designed to hasten the coming of these Islamic end times. What he didn't bother to say directly in his public remarks is that fact that these end times are also supposed to include the destruction of Israel and the Jews. Anyone who minimizes Ahmadinejad's statements simply doesn't realize how seriously he believes in this future.

Second, there is also a sense in which his words are a rebuke to Christians who are afraid to share publicly God's message of eternal life through Jesus Christ. Ahmadinejad is more willing to speak boldly for his own false views than Christians are to share the revealed truth of God's Word. What could God accomplish if we were as bold in sharing our faith as he has shown himself to be in promoting Islam?

Ahmadinejad views the future as a matter of life and death...of choices that will bring with them eternal consequences. And in that sense I agree with him. Unfortunately, we know from the Bible that his view of the future will not lead to eternal life.

Posted by Charlie Dyer at 6:48 PM No comments:

Israel has fared poorly in the United Nations over the years. According to one analysis:

...of 175 total resolutions passed by the [Security] Council, 97 were directed against Israel, as contrasted with 4 against all Arab states combined....In the years 1947 to 1989, the General Assembly passed a total of 690 resolutions (full or partial). Of these, 429 were against the Israeli position while only 56 were against Arab positions. Of the 56 votes not to the Arabs’ liking, 49 concerned the establishment or financing of peace-keeping forces.

While some might quibble with the specific number of resolutions or votes in this analysis, it's hard to argue that the UN seems to vote against Israel far more often than it supports them.

So does this mean Israel is indeed a pariah state, worthy of such condemnation? Or are there other factors at play?

It helps if we understand the math. There are currently 192 countries who are member states of the United Nations.

Israel has one vote; and its strongest ally, the United States, has one vote. Total votes = 2.
The Muslim majority countries each have one vote. Total votes = 48. (If Palestine becomes a recognized country, the total will increase to 49.) The United States and Israel combined represent 1% of the total votes in the General Assembly. The Muslim majority countries represent 25% of the total votes...the single largest voting block of its kind in the UN.

Perhaps that's why so many of the UN's votes seem to favor the Palestinians and condemn the Israelis!

Maybe it's time to restructure the UN. I would propose a model similar to the U.S. Congress, with two legislative branches. One would be set up similar to the Senate, with each country getting one vote regardless of its size. But the second would have proportional representation. The current system, which gives the Maldives (with a population of 350,000) equal voting weight as the U.S., makes no sense.

And perhaps the cost to run the entire operation could also be distributed more proportionally.

Right now the math doesn't make sense!
Posted by Charlie Dyer at 11:16 AM No comments:

Jew or Not Jew?

I saw an article today that disturbed me in the online edition of The Wall Street Journal. The article reported on an app for the iPhone (called "Jew or Not Jew?") that was just banned on France's app store. The application allows someone to identify whether a movie star, politician, key businessperson, journalist, etc. is Jewish.

The developer of the application is himself Jewish, and he is quick to point out he didn't develop the program for any racist or anti-Semitic purpose. On the app site (it's still available at Apple's online app store in the U.S.) he clearly states, "This app is only intended for fun. Nothing more! It does not aim to prove the superiority of any racial group. Remember that for each Jew listed in any one category there are many more equally talented non-Jews! The app simply shows that through hard work many Jews, often from immigrant families, have managed to achieve recognition."

I have no problem with his motives, nor do I have any problem highlighting the achievement of Jews. (Each week we feature an "Amazing Israel" segment on our radio program!) The impact of the Jewish people on the world has been far greater than one would expect from their relatively small population numbers as a percentage of the total world's population. I believe their impact is due, in part, to God's promised blessing on Abraham's descendants and, in part, to their commitment to education and hard work.

What concerns me is the reality that there are many in this world who will see a Jewish conspiracy behind such success. They already argue that the Jews control the media, financial institutions, and even entire governments. My fear is that such conspiracy theorists will use this app to validate their beliefs. This was never the intent of the designer, but it seems like those with anti-Semitic beliefs can use the application to justify their prejudice...and even possibly to identify specific targets for their hatred.

I wish this were not the case, but the sin nature is still alive and well in the human race. We don't need to make it any easier for individuals who might want to identify--and possibly harm--others because of their racial or ethnic background.
Posted by Charlie Dyer at 8:38 PM No comments:

Email ThisBlogThis!Share to TwitterShare to FacebookShare to Pinterest
Labels: anti-Semitism, iPhone app, Jew or not Jew?

In an article in today's edition of USA Today, the Palestine Liberation Organization ambassador to the United States stated that any future Palestinian state should be "free of Jews." The article then quotes Elliott Abrams who notes this would make the future Palestinian state the first since Nazi Germany to have as its goal a "country that was judenrein, or cleansed of Jews."

The original 1947 UN vote to partition Palestine (Resolution 181) spoke very specifically to the issue of citizenship for those living in the two states. " Palestinians citizens residing in Palestine outside the City of Jerusalem, as well as Arabs and Jews who, not holding holding Palestinian citizenship, reside in Palestine outside the City of Jerusalem shall, upon the recognition of independence, become citizens of the State in which they are resident and enjoy full civil and political rights."

Israel accepted the resolution, the Arabs did not. Israel gave citizenship to those Arabs living within the State of Israel, the Arabs are saying they will not. For the past year the Palestinians have refused to negotiate with Israel, even though they committed in the Oslo Accords to reach a settlement through negotiations. They are demanding the "right of return" to Israel for millions of Palestinians, an influx that would overwhelm the Jewish State...but at the same time they don't want a single Jew to live in their new State of Palestine.

Have the Palestinians ever been serious about a two-state solution? It seems that they are willing to have two states...as long as both end up being Palestinian!

We need to do everything possible to encourage our government to continue standing by Israel...and not to force them into accepting an unworkable two-state solution that is based on false promises of peace.

Posted by Charlie Dyer at 7:38 PM No comments: