There was a time when I thought the BBC--the British Broadcasting Company--was a standard for objective reporting of world news. Sadly, I learned long ago this is not the case. But I'm still surprised when I come across blatant examples of biased reporting coming from the BBC.

As I write this from Israel, I'm shaking my head at the BBC report I just read. The headline reads "New Israeli air strike into Gaza after 'ceasefire.'" The headline suggests that Israel violated its ceasefire with Hamas. The opening summary paragraph also lays blame on Israel for breaking the ceasefire. "One Palestinian was killed in a new Israeli air strike in Gaza, hours after Egypt apparently brokered a ceasefire."

So what's the problem? Well, the reality is that the Israeli air strike targeted a terrorist squad preparing to fire a rocket into Israel. It was the terrorists who were going to break the ceasefire, and Israel responded with the air strike to prevent that attack. The BBC finally says this...twenty paragraphs into a twenty-five paragraph story! And even then they couch it in a way that casts doubt on Israel's motives. "Israel's military said its aircraft 'targeted a terrorist squad... that was preparing to launch long-range rockets'." Come on BBC! Don't you think this might just be a little relevant to the story?!?

Do you want a more accurate account of the event? Try reading the Jerusalem Post article on the same subject. Their headline reads, "IDF strikes Gaza cell attempting to launch rocket at Israel."

The BBC ought to blush with shame at its lack of objectivity on this story!
Posted by Charlie Dyer at 9:01 AM No comments: 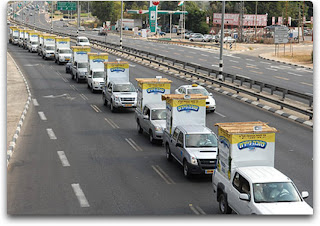 This picture, with accompanying article, in Ynetnews caught my attention. While it might look like a convoy of ice cream trucks, it's actually a group off-road trucks leased by the Chabad movement, one of the largest groups within Orthodox Judaism.

Each truck has a portable sukkah mounted in back. The trucks are now traveling throughout Israel to help people celebrate the Feast of Sukkot. (In Leviticus 23 Israel was commanded to live in booths during the seven-day Feast of Sukkot.) On their website, Chabad also provides instructions on how to build a sukkah for those Jews who might not have been observant in the past but who would now like to celebrate the feast.

I was encouraged by the article...though I also felt a need to go out and order a large soft serve chocolate-and-vanilla ice cream!
Posted by Charlie Dyer at 1:37 PM No comments:

Who Owns the Promised Land?

This past week Iranian President Mahmoud Ahmadinejad said he knows the answer to all the problems in the Middle East. “If the backers of the Zionist regime want to solve the issue...the solution is simple...everyone should go home.” Of course, he was referring to the Jews, and he was saying they are outsiders and intruders in the Middle East, sent from the West to colonize land that truly belongs to the Palestinians.

So are these the ravings of a demagogue that ought simply to be ignored? I believe it’s important for us to have an answer to his message and not just dismiss it as the rantings of some nut. I say this because many in the Middle East agree with what he is saying. To not give an answer is to let others assume he has made a valid--and unanswerable--point.

The Jewish people weren't sent to the Middle East from Europe following World War II as Ahmadinejad suggests. The Jewish presence in the land goes back thousands of years. And there are other legitimate reasons for supporting the Jewish right to a national homeland. I can think of five.

The bottom line is that Ahmadinejad is wrong on all counts. The Jewish people do have a historic right to live in the land, and Israel is as a legitimate nation. And that's why we need to challenge Ahmadinejad's statements.

What Does Islam Teach?

If you are willing to invest about an hour and a half of your time, I would strongly recommend you watch the online video, Islam: What the West Needs to Know. This video uses the Qur'an and other Islamic texts to explain what Islam teaches. Is it a religion of peace? Watch the video and decide for yourself.

Then share the link with others!
Posted by Charlie Dyer at 1:07 PM No comments: